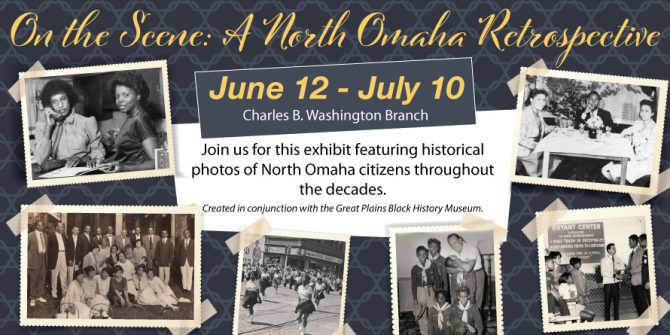 Each year, Juneteenth Nebraska, Inc. hosts a ceremonial flag raising at Charles B. Washington Branch (2868 Ames Ave.) to kick off a week of events celebrating and commemorating the ending of slavery in the United States. This year’s ceremony will take place on Saturday, June 12, at 11:30 a.m., during which the Lantern of Hope will be awarded to an individual who exemplifies mentorship, activism, and community involvement in Omaha.

Omaha Public Library (OPL) will contribute to the celebration of joy, freedom, and pride in North Omaha by hosting an exhibit featuring historical photos of North Omaha citizens throughout the decades. Dozens of photos will be on display at Washington Branch June 12 through July 10, and community members may view the exhibition during open library hours.

Photos in the exhibit showcase the social scene of North Omaha through the decades including social club members, North O hotspots, former Miss Cotillion winners, Miss Black Nebraska contestants, parades, and more. Though some individuals and locations in the images have been identified, viewers are invited to add to and interact with the exhibit by sharing the names of individuals and locations they recognize. OPL staff will be available to record these memories for posterity and potential future additions to the exhibit.

Images are provided by the Great Plains Black History Museum (GPBHM) and the Charles B. Washington Collection, donated to OPL after Washington, a prominent North Omaha civil rights activist, passed away in 1986. This exhibit would not be possible without assistance from GPBHM Executive Director Eric Ewing. Visit omahalibrary.org for information about this and additional events and resources at OPL.